associated negativities predominate the general life, resulting in misery for the common man, when the glow of Dharma is so much weakened that darkness appears to be engulfing the entire creation, then the Lord is compelled to enter our mortal world for the rejuvenation of the Dharma and to alleviate the sufferings of mankind. Kaliyug is the extreme state of negativities ruling the
roost, and the Divine took the form of Guru Nanak Dev to dispel evil
and ignorance.

The might of Kaliyug had been such that not only had there been a need for the spirit of Guru Nanak Dev to pass on from one form to another till the tenth Guru – Guru Gobind Singh, but also a great number of saints, mystics, fakirs have kept on emerging right till out present age to fight the might  of Kaliyug. Baba Vadbhag Singh, born in Vikrami 1772 has been a very mighty soldier of the Lord in war. He was born within the Sodhi clan of Sikh Gurus having been a descendant of the sixth Guru – Guru Har Gobind. Not all the progeny of any Guru can ascend to the Guru’s throne, but it does not follow that they are short of the spiritual prowess of the successor Guru. For instance, though Baba Shri Chand,
Guru Nanak Dev’s eldest son, did not inherit the Guru gaddi, yet he was held in such high esteem by all that even the household of
Guru Har Gobind had to seek his blessing so that the Guru could have progeny of great spiritual merit. Guru Har Gobind’s eldest son Baba Guruditta was entrusted to the tutelage of Baba Shri Chand as a mark of gratitude for this blessing. Baba Guruditta had two sons. The elder Dhirmal fell out of favour and the younger Har Rai ascended the throne which subsequently passed on to his son
Hari Kishan and then to Baba Guruditta’s brother Teg  Bahadur (9th Guru). Baba Vadbhag Singh was a fifth generation descendant of Dhirmal. He was as much a saint – soldier in the tradition established by Guru Har Gobind as any other successor of the sixth

Dhirmal, having been denied the Guru gaddi had his own seat a Kartarpur  though within the fold of Guru Nanak Dev. Baba Vadbhag Singh had inherited this seat in Vikrami 1794 at the age of 22. He had his own following of saint – soldiers whose devotion to their Guru came to be tested when they were asked to rescue some Hindu girls who had been abducted by some Moghul soldiers. Just a few of the Sikhs routed the Moghul force who were 200 in number and restored the girls to their respective families. But this skirmish led to protracted fight with the Moghuls. Though Baba Vadbhag Singh himself led his forces and won the battles, he saw the futility of continued war with the Moghul might and retired to a hilly village MAIDI in Dist. Hushiarpur where he spent his days in propagating Guru Nanak’s mission of Naam Jaap and Sewa. He would also spend long hours in dhyana and practice of austerities that brought him such sidhis which enabled him to make his spirit independent of body – constraints. He could thus detach his spirit from the body and traverse long distances to come to the aid of any of his followers who called out for help, when in distress.

One particularly pernicious manifestation of Kaliyug has been the practice of black magic and concomitant exploitation of spirits (ghosts) for furtherance of unethical ends by such practitioners. Thus the human negativities like greed, anger, jealousy, lust found their agents in these unscrupulous practitioners of tantra. Mankind thus became vulnerable to attacks from unseen forces and misery, sorrow, litigation, strife became prevalent. It became evident that some extra force was required to protect humanity from these iniquities. Baba Vadbhag Singh was divinely ordained to be that extra force and he did so by overpowering the masters of the nether world and putting them under his fold for the protection of mankind.

On one such occasion when Baba Vadhag Singh had detached his spirit from his body to go on a distant mission, leaving his body behind with instructions to his followers not to mistake him to be dead, an undue delay in his coming back created panic among the disciples and thinking him to be dead, they cremated him. When Babaji returned to re-enter the body, he found it to have been reduced to ashes. The spirit then instructed the disciples to erect a Nishaan (flag-staff like pole) where he could reside.

Seeing that Kaliyug was gaining ground, Babaji’s spirit instructed that such Nishaans be erected wherever his followers lived and the place be kept sacred through regular recitations of Granth Sahib, singing of the holy hymns called shabad Gurubani, congregations of the sangat where all participated in the kirtan with fervour. Babaji would be present at such spots whenever his spirit was invoked. In this manner, mankind has been receiving succour and relief from misery and also the mission of Guru Nanak Dev is being spread among the masses.

One such place where Baba Vadbhag Singh’s Nishaan was erected was in village KOT GAREWAL in Phagwara Dist of Punjab under the care of one of Chaggar clan who had been a direct disciple and sewadar of Babaji. The place became a centre for spiritual and temporal upliftment for whoever prayed there. The seat has been under the care of the Chaggar clan from generation to generation and its present incumbent is Babaji Ajit Singh Chaggar.

Guru Nanak Dev’s advent, in the 15th century, was divinely ordained because it is axiomatically known to all Hindus and whenever evil and

His Holiness Baba Jee Ajit Singh distributing chanda (coins) to people before leaving for buses to Darah Sahib at Holi times at his residence a Delhi.

His Holiness Baba Jee Ajit Singh Chaggar with his followers.

His Holiness Baba Jee in back garden at Ajit Darbar, Coventry, U.K.

His Holiness Babajee Ajit Singh Chaggar
(27th Oct  1919 - 27th May 2005)  - The Founder and Patron-in-Chief of the Ajit Darbar. A highly spiritual being whose parents demised at an early age and was adopted by his uncle who educated him well. After retiring as Currency Officer at RBI, Parliament Street. New Delhi.  Babajee Ajit Singh Chaggar with his wife Mohinder Kaur Chaggar together began their life’s journey to the path of spiritual meditation (Tapasya), Naam Simran and Seva blessed by the three strengths were : Guru Nanak Dev Ji, Guru Teg Bhahadur Ji and Baba Vadbhag Singh Ji Sodi. As they both went on with their daily chores more and  more people started to come to the house for help, the faith of those people got restored, things started to work better and move in a  positive direction. This was the beginning of Ajit Singh Chaggar, who later became to be known as His Holiness Baba Jee (faith healer) 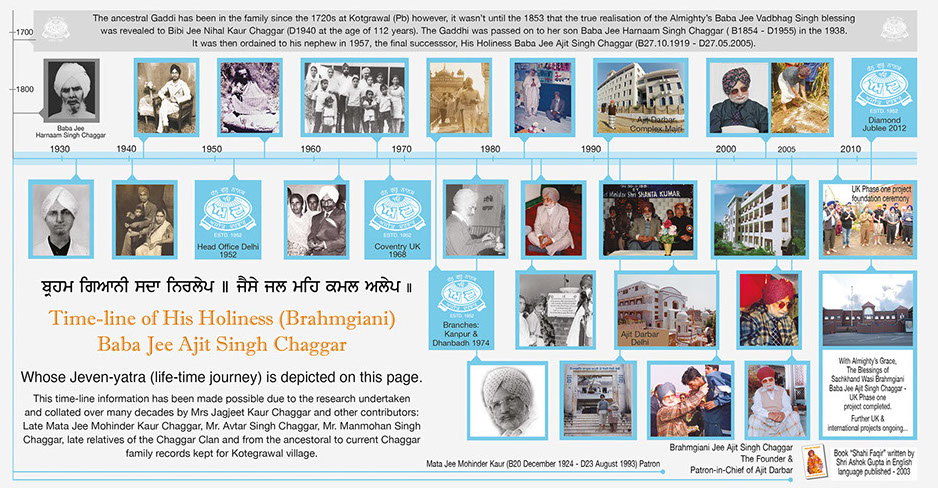